He realized the moment he ascended to the papal throne and learned all the truth.

God’s feelings that Garcia has possessed from generation to generation.

It has now reached a point where its corruption cannot be stopped.

“It is not true that divine power purifies Valentine’s malice.”

The Pope said to Veronica, who was present in an audience with the Cardinal.

“God’s goodwill and malice that got divided will meet and only temporarily stop corruption.

In fact, the goodwill was rotting as much as malice.

It was because what was perfect as one was split in two.

To combat the corruption, the Pope said, there is only one option.

“Those with divine power must be put in Valentine’s Land.”

“What do you mean by putting in…”

“It means to bury in the ground.”

Literally meant to bury people in the ground.

The Pope responded with a look that showed no emotion.

“But it’s impossible to use our precious talents from Garcia for such a task.”

And priests and saints with high divine power were Garcia’s assets.

“I will make a vessel to artificially contain the divine power, bury it in Valentine, and purify God’s malice endlessly.”

To do this, the Pope came into contact with the gutter rat.

It was to kill the gutter rat and completely acquire Hans, the godfather of chimera.

And he successfully completed the plan and sent Hans to the secret laboratory of the Kingdom of Bruto.

Upon hearing that, Veronica said.

As if she has been waiting for it.

“Perhaps, Count Chateau may have been preparing in advance, knowing Your Holiness’ deep meaning.”

“I don’t know what you’re talking about.”

“I think the children of the orphanage I took over from the Count would be very suitable as the vessels that Your Holiness is talking about.”

There is an old saying that children are the closest to God.

Because children have a pure and clean body and soul.

“If you want to make a chimera, you must use children as test subjects.”

“Saint, do you think that I don’t know that Of course, I should have tried.

But, children are weak.

They die easily before they even become a vessel.”

Ambrose was always concerned with preventing the corruption.

It was also due to that, that he secretly invaded the Kingdom of Bruto.

No one knows, but the Kingdom of Bruto has long been a Garcia Territory.

The secret research continued from then on.

“It means that I have already gone through a lot of trial and error.”

But Veronica shook her head.

“These children are different.

They are children who have been modified through experiments.”

The children of the orphanage run by the late Count Chateau were prepared vessels.

The experiment was successful, as Veronica had already expected.

Only one has succeeded so far.

It was a matter of time anyway.

Even though she wasn’t noticed by Valentine because of her greedy desire to increase her divine power.

“Send her back to Garcia.”

The Cardinal ordered the paladins.

‘He’s trying to send me to the lowest place.’

The other day, the Cardinal had previously threatened to send her out of God’s reach.

‘You’re going to drop me to the bottom’

Just for this It was impossible.

“This is wrong from the start! You are using children with their full potential as mere vessels of divine power!”

She exclaimed, giving strength to her toes and trying not to be dragged away.

“To bury a chimera of divine power in the ground is nothing but maintaining the current condition!”

“So, you mean you’re going to go against his will”

You are pressing for time.

Still, he was trying to save her life because she contributed to the success of the experiment.

‘If this happens, I have no choice but to dispose of her.’

It was when the Cardinal opened his mouth to issue new orders.

Before that, Veronica had revealed her own ambitions.

“Like I said before, doesn’t Valentine offend you See how the whole world is hung up on Valentine! It’s all because Garcia gave up God’s malice!”

“That should never happen.

Valentine’s monopoly on God’s malice is also part of God!”

Garcia had no intention to take on God’s malice.

It was because they thought that malice was a disaster, that it should not exist, and that it is of the devil.

The Cardinal felt very uncomfortable, as if stuck in mud.

To tell the truth, the biggest reason was that Garcia didn’t even have the ability to do that.

When there is darkness, there is also light.

‘Who doesn’t know that’

If they could take on Valentine’s God’s malice and have God’s full feelings, they would have done it earlier.

“Are you just trying to preach a sermon to me right now Listen carefully.

Whether it’s God’s goodwill or malice, an ordinary human cannot accept a part of God into his body.”

Divine power was nothing but energy that was forcibly extracted from God’s goodwill.

God’s goodwill, in itself, could never be put into the body.

“What do you think would be different in a chimera There are only certain people who can receive a part of God in their body.”

After a moment’s silence, the Cardinal spoke with a brief sneer.

As a lifelong servant of God, it was hard for him to admit that he did not receive God’s love.

If you have anything to say, I’ll listen to it one last time.”

Cardinal Andrea would pretend to be generous and listen to her will.

But as soon as he said that, Veronica responded rather proudly.

“God’s love that’s worth half a penny I don’t need any of that.”

And to the Cardinal who was so startled by her words, he couldn’t close his mouth, she spoke like driving a wedge.

“We, Garcia, will become the god of this new world.”

Her body was light and refreshed.

She had no unpleasant sensations upon waking up, which was strangely often when she passed out.

The feeling that her body was being crushed by a lump of rock and that flowing cold sweat.

Aria recalled her memory just before she lost consciousness, and she slowly opened her eyes.

Lloyd was in front of her.

She greeted him in surprise.

Lloyd then twisted his lips and gave a sharp reply with a smile.

His complexion was noticeably pale and his nerves seemed quite on edge.

He must have been patient enough.

Aria looked into his eyes.

Just before she passed out, it seemed that he was struggling to swallow his emotions, but this time again she used her powers until she passed out.

Lloyd looked at Aria and let out an annoyed sigh.

In an instant, Aria’s heart plummeted.

She wondered if he was angry enough to say that he’s pissed all of a sudden.

But Lloyd’s gaze was near her neck.

There was a necklace string at the end of her touch.

After Aria confirmed that the thing on her necklace was a drop-shaped jewel, she asked.

“You know what this is”

“The shaman said it is a jewel that draws out divine power to the limit.”

But unfortunately that bug…… that apprentice, no matter how much he holds him back, Gabriel wasn’t pushed back.

“He said his divine power seems to be innate.”

It was then that Aria realized why Lloyd was so upset.

So, she tried to poke the corner.

“Did I recover quickly because of divine power”

Then, as if he was quite offended by those words, the gap between his brows deepened.

Gabriel really treated her in a heartbeat as he claimed.

“By wearing the necklace.”

Lloyd didn’t look very pleased, but he said so.

“Maybe it will help you who are weak.”

Lloyd seemed to have made his decision to get her health back first.

“But is it transparent”

Aria lifted up the jewel that got completely drained of the divine powers.

Then he took off the necklace with a gentle hand and put it in his arms.

The other person to be robbed of that divine power must be Gabriel.

“He said his divine power seems to be excessively innate, so use it to restore your health while he’s here.”

It was because she did not know that the necklace and Gabriel’s divine power were being used to restore her health when she passed out.

“What did he say Is it okay”

Even if Gabriel was used in that way

Lloyd then murmured with his eyes darkened even more.

“He asked me to use it for you.

I’m going to tear his mouth off.

I want to rip it apart.”

Aria thought that sooner or later she would have to talk to him properly.

The banquet, which had been interrupted for a while by the commotion, resumed.

This time, not under the rose garden that has not yet bloomed, but under the cherry blossom trees in full bloom.

It was because Aria insisted she wanted to.

Of course, Lloyd, who she thought would tear Gabriel apart with a straight face, willingly allowed it more than he thought.

When Aria opened her rabbit eyes wide in surprise, he added.

“Instead, stay in my arms.”

However, Aria remembered Marronnier, who was overjoyed when she heard the news of the banquet.

She didn’t want to leave the banquet she had specially prepared for the employees as a nightmare.

Aria voiced her own voice this time, announcing the start of the banquet.

“Everyone, just have fun.”

“Our fairy! Our savior!”

“Please stay with us forever!”

Aria smiled brightly as she was in Lloyd’s arms among the crowd cheering her on and toasting to her.

Suddenly Aria felt someone’s gaze and turned her head and muttered a little.

He stood with his back against a cherry blossom tree in the distance, and was staring straight at Aria.

A number of intertwined and complex interests.

And a soft touch fell on her cheeks. 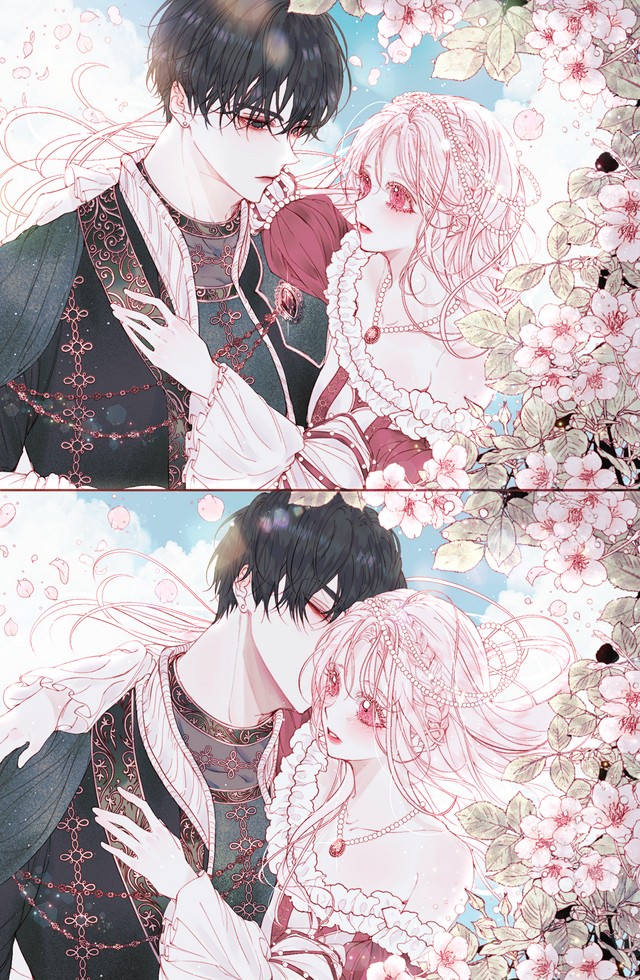 Scan the code to get the link and open it with the browser
Bookshelf synchronization, anytime, anywhere, mobile phone reading
Collection
Page
Source
Comment
Review
Feedback